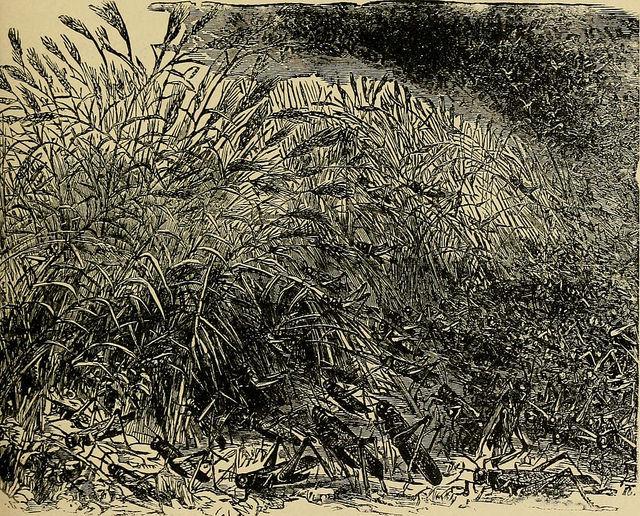 "The destroying angels are abroad", the Deseret News, the local Salt Lake City, Utah, newspaper reported in June of 1877. The destroying angels were grasshoppers (Rocky Mountain Locusts), swarms of them, and reportedly, they could "darken the sky for three miles deep". A local woman described the day she went outdoors to see what was bumping against her windows and found millions covering her house, yard, garden and the laundry she'd hung out to dry. They ate the crops, window shades and paint, the bark off trees, shawls and muslin skirts and according to one account, they’d eat up a "fellow's pantaloons when the color suited them".
In 1848, grasshoppers descended upon the new and tender crops of Utah settlers. They fought them off best they could, but grasshoppers were ruthless. You may have heard of the miracle of the gulls, a faith-promoting tale Mormon pioneers recorded in their journals, where all seemed lost, and suddenly, a cloud of gulls arrived and ate up all the invaders. Unfortunately, the gulls didn’t finish them off, nor did the event keep the grasshoppers from coming back.
Utah folks battled grasshoppers for years. Armed with willow bushes, men, women and children went out in the fields and tried to beat the insects to death. They swept them into coffee sacks and buried them in trenches. They trapped and burned them. They drowned them and still, they came in force. Utahans weren’t the only ones plagued with grasshoppers. Throughout the 19th century, they devastated crops in the plains states, in the west and south.
Grasshopper invasions continued into the 20th century . In the early 1900s, the Rocky Mountain Locust went extinct. But they weren’t the last of the grasshoppers. In 1931, another species attacked the Midwest, leaving fields bare and in 2014, Albuquerque, New Mexico reported a swarm that descended after a dry winter.
If you'd like to read more , check out "Pestiferous Ironclads: The Grasshopper Problem in Pioneer Utah" which gives a lengthy detailed account of the grasshopper problem, the far-reaching devastation and how they battled it, including journal entries from folks who experienced it firsthand, day in and day out. For another perspective, read "Mormons, Crickets and Gulls, a New Look at an Old Story". If you’re interested in what happened to the Rocky Mountain Locust, take a look at Jeffery Lockwood’s book, Locust: The Devastating Rise and Mysterious Disappearance of the Insect that Shaped the American Frontier.
Do you have family stories about grasshopper invasions? Interestingly, my ancestors lived in 19 th century Utah and those who kept journals didn't mention grasshoppers once.
"Pestiferous Ironclads: The Grasshopper Problem in Pioneer Utah" by Davis Bitton and Linda P. Wilcox. Utah Historical Quarterly, 46 #4
Mormons, Crickets, and Gulls: A New Look at an Old Story. William Hartley. Chapter 8. The New Mormon History. D. Michael Quinn, editor.
Locust: The Devastating Rise and Mysterious Disappearance of the Insect that Shaped the American Frontier. Jeffery Lockwood. Basic Books, New York, 2004.
Grasshopper Plagues: Agricultural Nightmare or Ecological Boon. High Country News. Krista Langlois. Jul 2014.
A Treatise. The locust plague in the United States: being more particularly a treatise on the Rocky Mountain locust or so-called grasshopper, as it occurs east of the Rocky Mountains, with practical recommendations for its destruction. 1877. Rand, McNally & Co.
Deseret News Jun 11, 1877. p 3
Locusts. Drawing from Flickr's Internet Archive Book Images. "Insect pests of farm, garden and orchard" 1915 No known copyright restrictions. Public Domain.
Kate E Thompson is the author of Bigfoot Hunters Never Lie and a contributing author of New Halem Tales - 13 Stories from 5 NW Authors. She is currently working on her second book, A Family of Forgetters, a historical novel set in 19th century Salt Lake City, Utah.