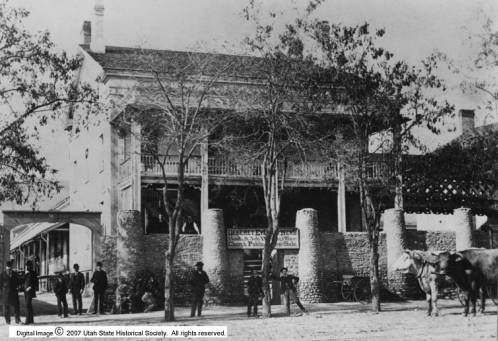 My 2nd great grandfather, Charles Denney, started his first job in America at the Deseret News in Salt Lake City, Utah. Hired May 14, 1867 at the age of 17, he worked for a dollar a day, sweeping floors, fetching copy from the telegraph office, washing rollers, and sawing and chopping mahogany wood to keep the presses’ caloric engine going. He moved up to the job of compositor (setting type) and retired from the newspaper 33 years later. How do I know? He included these rich details and more in a letter he penned to the editor of the Deseret News 17 years after he retired. I discovered it when I searched his name in Google News, an archive of scanned historical newspapers.
Charles Denney wasn’t famous, he was a regular guy, for a Mormon, and yet, I found all sorts of information in news articles that spanned his lifetime. There were Denney birth and death notices, his marriage announcement and 50 years later, a story about his Golden Wedding Anniversary. I discovered that he was a member of the Beekeepers Association and Microscope Society, was awarded ‘best shot’ in the territory and grew Peerless potatoes on his farm, each weighing in at 3 ½ pounds. He was shot at, acted in plays, sang in choirs, was robbed at gunpoint and protested his taxes. In April 1886, he was arrested in a raid of the Eleventh Ward on charges of cohabitation (polygamy). The Tribune printed a scathing story about him entitled, The Lawbreakers. Several newspapers followed his trial where a guilty verdict was reported and a sentence of six months in the penitentiary.
Were your ancestors in the news? There is an ongoing effort across the nation to digitalize historical newspapers and make them freely available via the internet. Google News has digitalized newspapers dating back as far as the year 1700. Chronicling America is a growing archive of newspapers, made available from grants from The National Digital Newspaper Program (NDNP). The Internet Archive is another place to check out. It contains newspapers from all over the world. Follow the links below, dig through a few historical newspapers online and see what you find.
What if your family didn’t make the headlines? My 3rd great grandfather from Ireland isn’t mentioned once in his county's newspaper, but I learned from several local stories that folks didn’t much like the Irish. If you don’t find your ancestor by name, newspapers still offer a wealth of pertinent historical background and insight.
One more tip or I should say warning – once you start reading old newspapers, you won’t want to stop. You're welcome to share links to free historical newspapers in the comment section. Until next time, have fun searching!
Links: anyone can access the following via the internet at no charge:
Google News Archive
Chronicling America
Internet Archive
Harold B Lee Library
University of Utah
Signature Books Library
My Pinterest: 39 boards and 3.9 k pins that motivate writers, readers, history buffs... The Need to Read, The Danish Experience, Finding Family, Women did What?, Chihuahua Love, A Plant Based Diet, Gardening, Pamper Yourself, Early America, Irish Experience, Appalachia and More
Image. Salt Lake City tithing office and first home of the Deseret News ca. 1870s. It was located on the corner of Main Street and South Temple where the Hotel Utah (Joseph Smith Memorial Building) is now. In the early years of the LDS church, members would rarely pay their tithing (1/10 of total earnings) with money. More often, it was paid in livestock, dry goods, or a portion of their crop. This was all stored at the tithing office yards and distributed through the Deseret Store. Courtesy of Utah State Historical Society
Kate E Thompson is the author of Bigfoot Hunters Never Lie and a contributing author of New Halem Tales - 13 Stories from 5 NW Authors. She is currently working on her second book, A Family of Forgetters, a historical novel set in 19th century Utah.