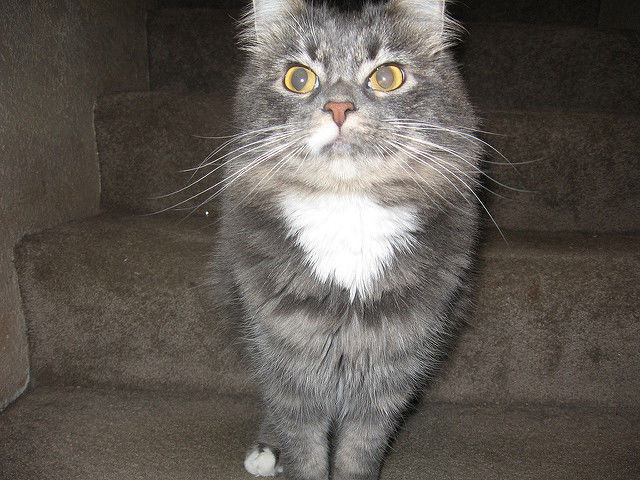 Mitzi leaps onto my desk when I least expect it. She head butts me and lies on her back under my desk, her paws curled, the pose that makes me pause and say 'aw'.
Mitzi isn't the only cat in my life. Don't tell her. I have another who is rather surly. I doubt Mitzi would like him. His name is Bartholomew. He lives in my novella "The Asteroid's Daughter and the Serpent Handler's Son". Whether she likes it or not, Mitzi did serve as inspiration. She is a cat, after all.
Mitzi is a Norwegian Forest Cat. Well, we think she is. We rescued her from a shelter in Seattle, WA eight years ago. She was adorable, that's all we knew then. The giant paws, hairy toes and ear tufts, we learned, are typical of the Norwegian Forest Cat. If climbing the Christmas tree is proof, she is one.
We like to call her Miss Fluffy Pants. All that thick curly fur, you can imagine. A cold-weather cat, yet, she's never set a paw in snow. Her ancestors may have served as mousers on Viking Ships sailing for Norway. Mitzi has never seen a mouse, but I'm pretty sure she dreams about chasing them.
Kate E Thompson is the author of Bigfoot Hunters Never Lie and a contributing author of New Halem Tales - 13 Stories from 5 NW Authors. She is currently working on her second book, A Family of Forgetters, a historical novel set in 19th century Utah.